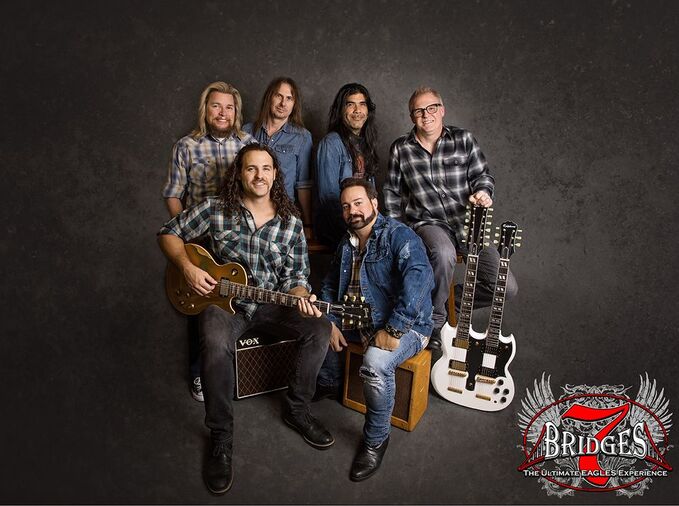 BUY TICKETS
7 Bridges is a Nashville, Tennessee-based Eagles tribute band. Using no backing tracks or harmonizers, 7 Bridges faithfully re-creates the experience of an Eagles concert from the band’s most prolific period. Every show features one brilliant hit single after another with some mighty Don Henley and Joe Walsh surprises sprinkled into the mix. 7 Bridges offers the perfect blend of songs to capture all levels of Eagles devotees. 7 Bridges is a tour de force of talent combining incredible musicianship, vocal precision and a stage presence that has garnered them nationwide acclaim. The evening will conclude with a spectacular fireworks display immediately following the concert.

Ever since he was 2 years old, Jeremy has had a guitar in hand. He began formal study of the instrument in high school and throughout college, instructed by noted guitarists Wayne Peabody, Keith Crook, Gary Wittner, and Mike Baggetta. Jeremy has had the pleasure to share the stage with many phenomenal musicians over his career, including guitarist John Pizzarelli, the folk-rock band Carbon Leaf, and the Barnes-Gordy-Walsh Trio. To a greater extent, he has had the joy and great privilege to play music with the members of Junco for almost a decade. When he is not performing with Junco, Jeremy works as solo singer/songwriter and music entertainer touring year round throughout New England. Outside of his musical career, he is either in the classroom teaching students or out hiking, fly fishing, canoeing, or camping with is wife and their goldendoodle, Baxter. In his spare time he enjoys tying flies, reading, flannel shirts, and dark roast black coffee. He lives in the White Mountain Region of Western Maine.